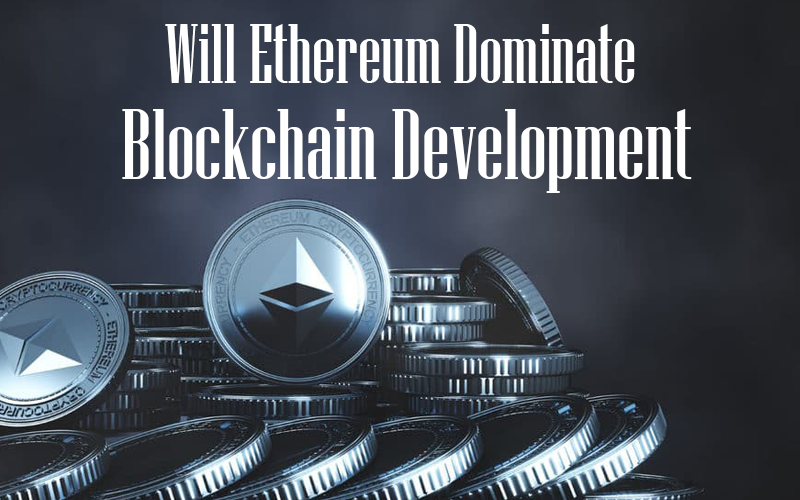 In today’s world of blockchains many people question about Will Ethereum dominate Blockchain development. Primarily Blockchain technology develops information networks. The more people join a network; it exponentially grows to become more valuable. It is fundamentally the main role of networks.

Presently there are several hundreds of digital coins that have already been developed by acumen founders. It is also widely expected that over the next few years, they would be existing in their thousands. Agood number of these coins would have good value and walkout successful onto the global stage.

There are numerous reasons behind blockchain development and understanding them save you from lots of issues in the future. In this article, Ethereum is the main blockchain under consideration.

Ethereum primarily functions in a uniquely different way which actually makes it an interesting crypto to associate with. They are well designed as a platform with a supporting blockchain that is custom-developed to enable the creation and smooth operation of new applications. As part of its blockchain solutions, these effective applications are designed to function securely.

It is noted that the Ethereum platform more like a highway network that enables the transaction, transportation of goods &services while connecting cities with people living in them. This blockchain technology is governed by a set of defined rules and so by these set rules, anyone could achieve their aims and objectives on the network.

For the blockchain, it needs a network of nodes computersthat are securely connected via the internet to enhance transaction movements on the platform. When it actually comes to building and powering new exchanges, applications, and businesses on the network, the passionate users are virtually recommended to obey set of rules on the platform.

Similarly to Bitcoin, no one controls Ethereum. The platform is wholly powered by a network of distributed computers that needs no entity control. With this blockchain technology, no person,firm could restrict anyone from accessing their own assets.  This popular Ethereum platform has risen to become so valuable in its short years of existence. As a result the passionate users can use these blockchain solutions to develop contracts, online businesses, applications, etc.

Ethereumis widely believed amongst those who are enthusiastic about cryptocurrency to have a stronger staying power. They are building the ability for regular developers with innovative ideas to build new features appson the blockchain. Also it is expected the ability to leverage the power of the blockchain.

One must try better way to build the future than developing meaningful blockchain solutions, enhance them, and distribute them evenly. The Ethereum platform is showing itself tremendous results.Finally 2018 is trusted to be the “year of Ethereum” – the year when the cryptocurrency will surpass Bitcoin and dominate the crypto landscape.